Two binding UN Conventions, CEDAW* and CRC*, plus the Beijing Platform for Action and UN CSW; the Women, Peace & Security Resolution 1325; & the UN Sustainable Development Goals – Agenda 2030, leaving no one behind.

*1) UN Convention on the Elimination of All Forms of Discrimination against Women, New York, (CEDAW), 18 December 1979

« The Convention was the culmination of more than thirty years of work by the United Nations Commission on the Status of Women, a body

established in 1946 to monitorthe situation of women and to promote women’s rights. The Commission’s work has been instrumental in bringing to light all the areas in which women are denied equality with men. These efforts for the advancement of women have resulted in several declarations and conventions, of which the Convention on the Elimination of All Forms of Discrimination against Women is the

central and most comprehensive document. 42 years later, where do we stand today?  More: https://www.ohchr.org/en/professionalinterest/pages/cedaw.aspx

*2) UN Convention on the Rights of the Child (CRC), adopted and opened for signature, ratification on 20 November 1989

« The Convention is an international agreement which comprises 44 articles defining the individual rights of children under 18 years of age. It was adopted by the UNGeneral Assembly in 1989 and followed by the World Summit for Children in New York in September 1990. The World Summit for Children was an unprecedented gathering of 71Heads of State and governments to discuss the fate and future of children, without regard to race, color, sex, language, religion, political or another opinion, national ethnic or social origin, property, disability, birth, or another status. 31 years later we are asking “Where have all the promises gone”? More:  https://www.ohchr.org/en/professionalinterest/pages/crc.aspx

Since the Beijing Women’s Conference, the implementation of the Platform for Action has been assessed by the UN Commission on the Status of Women (CSW)

each year, and through a review process carried out every five years, reaffirming States’ commitment to its full implementation. https://www.unwomen.org/en/csw/brief-history

Priority theme: Achieving gender equality and the empowerment of all women and girls in the context of climate change, environmental and disaster risk reduction policies, and programs.

Theme 2021: “Women’s full and effective participation and decision-making in public life, as well as the elimination of violence, for achieving gender equality and the empowerment of all women and girls”. Link to the 2021 Agreed conclusions: (E/2021/27-E/CN.6/2021/14)

Excerpt from the 2021 Agreed Conclusions (Para 9):

“The Commission emphasizes the mutually reinforcing relationship among achieving gender equality and the empowerment of all women and girls, and the full, effective, and accelerated implementation of the Beijing Declaration and Platform for Action and the gender-responsive implementation of the 2030 Agenda for Sustainable Development. It acknowledges that gender equality and the empowerment of women and girls and women’s full, equal, effective, and meaningful participation and decision-making in public life, as well as the elimination of violence, are essential for achieving sustainable development, promoting economic growth and productivity, ending poverty in all its forms and dimensions everywhere and ensuring the well-being of all. It recognizes that women and girls play a vital role as agents for sustainable development”. 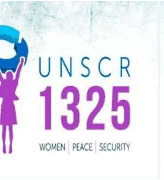 The 2021 report “follows up on the Secretary-General’s directives to the United Nations and the five goals for the decade laid out in the report of the Secretary-General on Women, Peace, and Security from 2019 and 2020, paying special attention to the goal of reversing the upward trajectory in global military spending with a view to encouraging greater investment in the social infrastructure and services that buttress human security. It recognizes that there are remaining gaps related to the implementation of the WPS agenda, and which could increase “unless targeted efforts are integrated into COVID-19 recovery efforts.”

The report notes that “even though the response to the COVID-19 pandemic added to the evidence of the effectiveness of women’s leadership at the highest levels, women continued to be underrepresented in that response and in other decision-making forums, pushed out of the workforce and subjected to a surge of violence across the world as soon as lock-downs and quarantines were put into effect.”

The report also recognizes that “gender equality is a question of power”, that “power will not redistribute itself equally in a male-dominated world”, and that “there are clearly persistent gaps and stagnation in women’s participation in political leadership, peace and security and access to economic resources and decision-making.” The report recalls that women and peace and security represent a core priority of the Secretary-General’s Action for Peacekeeping initiative and that “the focus on increasing the number of women active in peace operations must continue”.

“Initiatives by Governments across the world to integrate gender equality into the reform of their security sectors are a crucial part of this effort.”

are a universal call to action to end poverty, protect the planet and improve the lives and prospects of everyone, everywhere. The 17Goals were adopted by all UN Member States in 2015, as part of the 2030 Agenda for Sustainable Development, which set out a 15-year plan to achieve the Goals. Today, progress is being made in many places, but, overall, action to meet the Goals is not yet advancing at the speed or scale required. 2022 needs to create ambitious action to deliver the Goals by 2030. With just under ten years left to achieve the Goals, world leaders at the SDG Summit in September 2019 called for a Decade of Action and delivery for sustainable development and pledged to mobilize financing, enhance national implementation and strengthen institutions to achieve the Goals by the target date of 2030. The UN Secretary-General called on all sectors of society to mobilize for a decade of action on three levels: global action to secure greater leadership, more resources, and smarter solutions for the Sustainable Development Goals; local action embedding the needed transitions in the policies, budgets, institutions and regulatory frameworks of governments, cities and local authorities; and people action, including by youth, civil society, the media, the private sector, unions, academia, and other stakeholders, to generate an unstoppable movement pushing for the required transformations. »

LINKS TO EACH CONCEPT THEME:

Why 75%A4GI claim a seat at the table

A bit of WWSF history

“Women in leadership must be the norm”

Invitation to join the 75% Campaign and Registration Form